This paper concerns the interaction between water sprays and a smoke layer in a corridor, without any interaction with fire activity. Three water sprays are tested, a high-pressure water mist system and two sprinkler systems under different operating pressures. Our study aims to compare the impact of these three sprays on the smoke layer, based on the analysis of temperature and transmittance profiles. Characterization of the smoke layer before spray activation, based on either temperature or transmittance was found to be similar, providing a smoke free layer at around middle height in the corridor. During spray operation, discrepancies were observed in some cases depending on whether the smoke layer was studied based on the temperature or the transmittance profiles. Spray operation may provide gas cooling, resulting in homogeneous temperature profiles, while vertical variations of droplet size and soot or droplet concentration can still induce a variation in transmittance. The impact of water spray on the smoke layer varies with the spray system. For the water mist system and the highest-pressure sprinkler system, the spray operation induces a complete de-stratification with well-mixed steady-state conditions along the corridor as well as strong smoke cooling and visibility alteration. With the lowest-pressure sprinkler system, only a localized alteration of this stratification is observed under the spray, while the environment remains thermally and optically stratified downstream in the corridor despite spray operation. Relationships described in the literature were used to confirm and explain these observations. Ratios were evaluated to compare the drag effect due to the spray and the buoyancy effect related to the fire. All tests provided ratios of drag number over buoyancy number much greater than one. This confirms the ability of these relationships to predict the occurrence of de-stratification. Qualitatively, the highest ratios were found for the high pressure system and for the water mist system, which actually led to the most important de-stratification effects. In contrast, the weaker ratio found for the lower pressure system was still above one, i.e., coherent with a de-stratification which did not affect the whole corridor however. 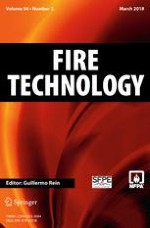 Risk Analysis and Assessment to Enhance Safety in a Smart Kitchen