The linearisation approach to approximating variance of complex non-linear statistics is a well-established procedure. The basis of this approach is to reduce non-linear statistics to a linear form, justified on the basis of asymptotic properties of large populations and samples. For diverse cross-sectional measures of inequality such linearised forms are available, though the derivations involved can be complex. Replication methods based on repeated resampling of the parent sample provide an alternative approach to variance estimation of complex statistics from complex samples. These procedures can be computationally demanding but tend to be straightforward technically. Perhaps the simplest and the best established among these is the Jackknife Repeated Replication (JRR) method. Recently the JRR method has been shown to produce comparable variance for cross-sectional poverty measures (Verma and Betti in J Appl Stat 38(8):1549–1576, 2011); and it has also been extended to estimate the variance of longitudinal poverty measures for which Taylor approximation is not currently available, or at least cannot be easily derived. This paper extends the JRR methodology further to the estimation of variance of differences and averages of inequality measures. It illustrates the application of JRR methodology using data from four waves of the EU-SILC for Spain. For cross-sectional measures design effect can be decomposed into the effect of clustering and stratification, and that of weighting under both methodologies. For differences and averages of these poverty measures JRR method is applied to compute variance and three separate components of the design effect—effect of clustering and stratification, effect of weighting, and an additional effect due to correlation of different cross-sections from panel data—combining these the overall design effect can be estimated. 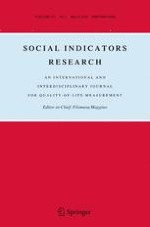 Employment Quality: Are There Differences by Types of Contract?

Household and Contextual Indicators of Poverty in Tunisia: A Multilevel Analysis

Conceptualisation and Measurement of Quality of Life Based on Schalock and Verdugo’s Model: A Cross-Disciplinary Review of the Literature