Polydimethylsiloxane or glycidol-grafted gelatin films with excellent flexibility and strong hydrophobicity were fabricated by mono epoxy-terminated polydimethylsiloxane (PDMS-E)-grafted gelatin (PGG) and glycidol-grafted gelatin (GGG). Mixed reactive aqueous solutions of PGG and GGG were poured into a Teflon mold. The solutions were dried slowly and eight films were obtained with a thickness of around 200 μm, including gelatin film, PGG film, GGG film, and resulting films at gelatin/PGG/GGG ratios of 2.5:0.5:1.0, 5.0:1.0:1.0, 7.5:1.5:1.0, 10.0:2.0:1.0, and 5.0:1.0:3.0 (weight percentage). The microstructures of these films were confirmed by scanning electron microscopy, attenuated total reflection-Fourier transform infrared spectroscopy, atomic force microscopy, and small-angle X-ray scattering. The influence of the gelatin/PGG/GGG ratios was studied with respect to the hydrophobicity and the mechanical property of the films. The results showed that the contact angle of gelatin-based film increased from 76° to 126° after blending with gelatin, PGG, and GGG at 5.0:1.0:1.0 (weight percentage). Moreover, the elongation at break value of the film reached 3400%. The resulting films showed high flexibility and strong hydrophobicity, which is promising for high-performance coatings. 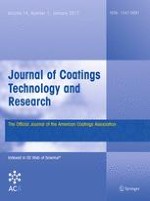 Effects of isomerism on near infrared properties of perylene bisimide derivatives

Erratum to: Effect of heterogeneity on hydro/ice-phobic properties of alkylsilane/fluoro-alkylsilane-based coatings on Al substrates