Language scientists have broadly addressed the problem of explaining how language users recognize the kind of speech act performed by a speaker uttering a sentence in a particular context. They have done so by investigating the role played by the illocutionary force indicating devices (IFIDs), i.e., all linguistic elements that indicate the illocutionary force of an utterance. The present work takes a first step in the direction of an experimental investigation of non-verbal IFIDs because it investigates the role played by facial expressions and, in particular, of upper-face action units (AUs) in the comprehension of three basic types of illocutionary force: assertions, questions, and orders. The results from a pilot experiment on production and two comprehension experiments showed that (1) certain upper-face AUs seem to constitute non-verbal signals that contribute to the understanding of the illocutionary force of questions and orders; (2) assertions are not expected to be marked by any upper-face AU; (3) some upper-face AUs can be associated, with different degrees of compatibility, with both questions and orders. 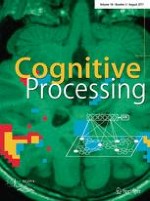 Flow and quiet eye: the role of attentional control in flow experience

Reasoning and mathematical skills contribute to normatively superior decision making under risk: evidence from the game of dice task

The role of stimulus predictability in the allocation of attentional resources: an eye-tracking study

The movement-induced self-reference effect: enhancing memorability through movement toward the self