The estimation of settlements, differential settlements and relative rotations on critical positions of the foundation is indispensable when carrying out analyses of both ultimate and serviceability limit states. The use of finite element method is recommended in cases where soil–structure interaction is expected to be significant. The scope of this paper is a contribution to the investigation of general trends in the effects of main parameters on the interaction. A typical five-span frame building with varying rigidity was examined by using finite element numerical method under 2-D conditions. Soil below the foundation was simulated as linearly elastic or elastoplastic medium. The effects of superstructure and foundation rigidity are closely related to the effect of soil deformability thereby analyses were performed in terms of relative rigidity factors. The effects of specific foundation types, namely isolated footings, flexible and rigid mat, were investigated in detail. The conclusions were focused on the development of normalized differential settlements, on the influence of the relative rigidity factor as well as on the determination of those cases where the interaction approach is necessary to be used for the analysis.
Anzeige 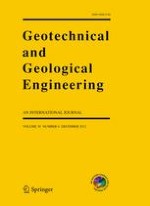 Erosion and Drainage Well Blowout in the Foundation of the Plavinas Powerhouse: Case History

Characterization of Paving Blocks for Road Pavement: Case of the Urban High-Intensity Manpower Program in Senegal