Using pooled cross-sectional time-series data for the 50 U.S. states over a 25-year period, this article examines how well four conceptual groups of social correlates—demographic, economic, social, and cultural factors—are associated with the 1976–2000 patterns in overall suicide rates and suicide by firearms and other means. Unlike past research that typically considers only one dimension, this analysis differentiates between spatial and temporal variation in suicide rates to determine whether and how social correlates operate differently in these two contexts. Results indicate that suicide rates correspond closely to social correlates. Within U.S. states, lower overall suicide rates between 1976 and 2000 were associated with demographic change (e.g., larger numbers of foreign-born) as well as with fewer numbers of Episcopalians. Across U.S. states, variation in overall suicide rates over the period was related to demographic (percentage male), economic (per capita income), social (percentage divorced), and cultural (alcohol consumption and gun ownership) factors. However, findings differ importantly by type of suicide, and across time and space. Reasons for these distinct patterns are discussed. 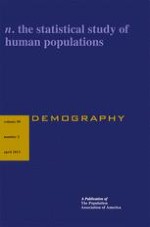 Trends in Occupational Segregation by Gender 1970–2009: Adjusting for the Impact of Changes in the Occupational Coding System

Gender and the Neighborhood Location of Mixed-Race Couples

Erratum to: Why Is Infant Mortality Higher in Boys Than in Girls? A New Hypothesis Based on Preconception Environment and Evidence From a Large Sample of Twins

The Contribution of Smoking to Black-White Differences in U.S. Mortality