Fractional horsepower motors are used to power exhaust fans such as those found in bathrooms and oven hoods. There was an increase in fires attributed to these motors shortly after the year 2000. Still, many argue that these motors cannot cause fires because they contain a thermal cutoff (TCO) unit that shuts off electrical current when the TCO reaches a specific temperature. In this paper we describe an unsafe failure mode that can occur after extended use. As fans age, the bearings wear out, resulting in heating of the coil wires. Excessive heating results in break down of the wire insulation, which can lead to a short between wires and create an autotransformer configuration. An autotransformer can support high current in only part of the wiring, resulting in resistive heating sufficient for ignition. With the low thermal conductivity of the coil (\(0.0162\,W/(\hbox {cm}\,{^{\circ }}\hbox {C})\)) and the poor performance of the TCO (no cutoff up to \(260{^{\circ }}\hbox {C}\)), a large temperature gradient is possible. The gradient allows for ignition in one part of the motor without activating the TCO. We experimentally validated the proposed mechanism in an isolated motor and a complete fan assembly resulting in ignition after 18 s and 23 s. The assembled fan burned for more than 6 minutes before we extinguished the flames for safety reasons. Our results are consistent with field results from actual fires. 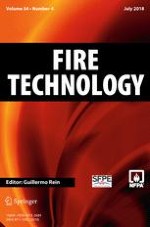