Recently, as the mobile phone technology has been developed, apps used on mobile phones have also been developed rapidly in P2P cloud computing environment. In particular, as the IoT(Internet of Things) technology has been grafted on mobile phones, large and small data have been diversified centering on P2P computing environments. However, due to the diverse sizes and uses of big data used in P2P environments, users have many complaints regarding the low accuracy of big data search results and service delay. Previous studies have been actively researched to develop a technology that can cheaply construct and efficiently utilize IT infrastructure for big data processing. In particular, research has been conducted on technologies in which a large number of servers distribute and manage a huge amount of data generated or processed from a portable device such as a smartphone. However, existing researchers do not only store and manage big data, but also need additional data latency and service delay prevention technology to cope with various problems flexibly and to prevent service interruption. Currently, there are many researchers, but until now, there has been no research to satisfy user’s search delay time and accuracy by using size and usage of big data. This paper proposes a fast Fourier transform-based efficient data processing scheme so that users can accurately search for desired data out of different kinds (size, use, type, etc.) of big data in P2P cloud computing environment. The proposed scheme utilizes the keywords used by users to search big data as coefficients of polynomial expressions with a view to enhancing polynomial expression transformation speeds. In addition, the proposed scheme organized the coefficients of polynomial expressions that constitute subnets in pairs with probability values for processing in linkage with each other to enhance data accessibility. In particular, the proposed scheme transforms the vectors shown using the coefficients of polynomial expressions in pairs with the polynomial expressions so that searched data can be quickly identified thereby minimizing user service delay time. As a result of the performance evaluation, the data processing time was improved by 7.3% on average compared with the existing techniques and the server’s data processing rate per unit time was improved by 11.1% on average compared to existing techniques. In addition, according to the data size, the communication delay time between the server and the user improved by an average of 8.9% and server overhead was 10.4% lower than the existing techniques on average. 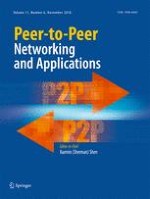