Breast cancer is the second most common cause of death among the women worldwide, whereas the early detection may well lead to a longer survival or even full recovery. With the development of clinical technologies, massive tumor feature data become available to be collected and meanwhile many machine learning techniques have been introduced to support doctors in diagnostic decision-making process. In this paper, we develop a support vector machine (SVM) based diagnosing system which mainly consists of three stages. For the first stage, principal component analysis is implemented to eliminate the redundant information and extract representive patterns out of the original data. This procedure reduces the feature space dimension which cuts down the computational complexity significantly. In the second stage, we search the optimal parameter values for SVM using the differential evolution algorithm. At last, a classifier is trained to differentiate the incoming tumors. In order to objectively and comprehensively evaluate the classifier’s performance, a series of indices are considered simultaneously such as classification accuracy, sensitivity, specificity and area under receiver operating characteristic curves. In comparison with K-nearest neighbor, random forest, bagging, naive bayes, decision tree and other classificaiton approaches, the proposed method presents a superior performance when tested on the Wisconsin Diagnostic Breast Cancer (WDBC) data set from the University of California with fivefold cross validation. 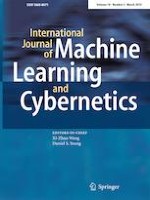