Persistent Organic Pollutants (POPs) threaten human health and the global environment. Recognizing their dangers many countries began to limit or ban POPs production, use, and release in the 1990s. Eventually the Stockholm Convention on POPs, was adopted in 2001 and entered into force in 2004. The Global Environment Facility (GEF) provides financial support to developing country Parties for the implementation of the Stockholm Convention. The GEF’s POPs investment portfolio focuses on: 1) strengthening the capacity of developing country Parties to implement the Stockholm Convention; 2) establishing and supporting partnerships to develop and implement National Implementation Plans (NIPs), and 3) demonstrating and deploying best technologies and practices to reduce POPs emission, including development of safe alternatives. Since 2001 the GEF has committed US$568.8 million to POPs projects and leveraged some US$1474.5 million in co-financing from partners in the public and private sectors, bringing the total value of the GEF POPs portfolio to over US$2 billion. With GEF support, 108 developing country Parties have developed their NIPs. The GEF also financed 109 projects for the implementation of the Convention. Upon completion, these GEF POPs investments will contribute to the disposal of more than 70,000 tons of Polychlorinated Biphenyls (PCBs) oil, contaminated equipments, and waste, more than 40,000 tons of obsolete POPs pesticides and associated waste, and reducing dioxin/furan and mercury emission by introducing environmentally sound technologies and best practices. This paper summarizes: 1) direct and indirect GEF investments to support the goals of the Stockholm Convention; 2) investment case studies on PCB, DichloroDiphenylTrichloroethane (DDT), chlordane and mirex, medical waste, obsolete POPs and engaging civil society; and 3) lessons learned in terms of GEF financing strategies, best technologies and environmental practices to address POPs. 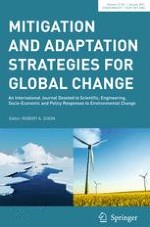 Climate change mitigation strategies in agriculture, forestry and other land use sectors in Vietnam

How sustainable are forestry clean development mechanism projects?—A review of the selected projects from India

Millennium development goals and clean development: synergies in the Pacific

Impacts of bioethanol on gasoline prices in the Philippines: an econometric analysis