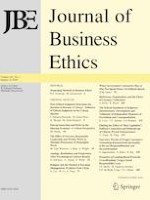 Halloween, Organization, and the Ethics of Uncanny Celebration

Meta-Regulation in Practice: Beyond Normative Views of Morality and Rationality by F.C. Simon