Orbit Problems are a class of fundamental reachability questions that arise in the analysis of discrete-time linear dynamical systems such as automata, Markov chains, recurrence sequences, and linear while loops. Instances of the problem comprise a dimension \(d\in \mathbb {N}\), a square matrix \(A\in \mathbb {Q}^{d\times d}\), and a query regarding the behaviour of some sets under repeated applications of A. For instance, in the Semialgebraic Orbit Problem, we are given semialgebraic source and target sets \(S,T\subseteq \mathbb {R}^{d}\), and the query is whether there exists \(n\in {\mathbb {N}}\) and x ∈ S such that Anx ∈ T. The main contribution of this paper is to introduce a unifying formalism for a vast class of orbit problems, and show that this formalism is decidable for dimension d ≤ 3. Intuitively, our formalism allows one to reason about any first-order query whose atomic propositions are a membership queries of orbit elements in semialgebraic sets. Our decision procedure relies on separation bounds for algebraic numbers as well as a classical result of transcendental number theory—Baker’s theorem on linear forms in logarithms of algebraic numbers. We moreover argue that our main result represents a natural limit to what can be decided (with respect to reachability) about the orbit of a single matrix. On the one hand, semialgebraic sets are arguably the largest general class of subsets of \(\mathbb {R}^{d}\) for which membership is decidable. On the other hand, previous work has shown that in dimension d = 4, giving a decision procedure for the special case of the Orbit Problem with singleton source set S and polytope target set T would entail major breakthroughs in Diophantine approximation. 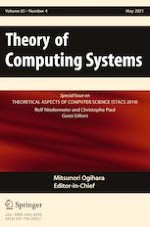