This work investigates the flow structures of a precessing jet in an axisymmetric chamber with expansion ratio \(D/d=5\) and length-to-diameter ratio \(L/D=2.75\) at Reynolds number \({\mathrm{Re}}_{d}=2.4\times 10\) 4 by use of planar particle image velocimetry. Time-averaged and statistical results indicate that the precessing jet flow is symmetric, on average, in the streamwise plane. Large velocity fluctuations and vorticity exist in the inner and outer shear layers. In addition, vorticity is found in the boundary layer of the chamber wall, due to backflow and confinement. Subsequent correlative analysis indicates that coherent structures are mainly distributed in the shear layer and decay with its development. The results also indicate that precession occurs in the region \(x/d>5\) and may lead to changes in the structure and position of the shear layer. Further spectral analysis shows that a low-frequency structure with \(\mathrm{St}\approx 7.4\times 10\)−3, which can be interpreted as precession, exists in the flow field and that the corresponding dominant frequency decreases as the fluid flows downstream. Finally, proper orthogonal decomposition (POD) analysis reveals the most energetic mode representing the flow structure of precession, which has the highest proportion of the total downstream energy. The precession induces an alternating flow, switching between outflow from one side of the chamber and inflow from another side. In addition, four typical instances of flow structures of precession with different intensities or phases are presented through low-order reconstruction of the specified POD modes. These cases show that due to the instability of the reattachment point, the mainstream oscillates up and down in the region near the nozzle exit and twists back and forth in the region near the chamber exit, with changes of scale and position of flow structures on the measurement plane, exposing complex behavior of the instantaneous flow field of precession. 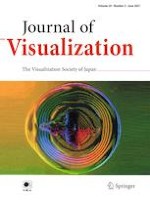 Lumina: an adaptive, automated and extensible prototype for exploring, enriching and visualizing data