This paper presents a PVS development of relevant results of the theory of rings. The PVS theory includes complete proofs of the three classical isomorphism theorems for rings, and characterizations of principal, prime and maximal ideals. Algebraic concepts and properties are specified and formalized as generally as possible allowing in this manner their application to other algebraic structures. The development provides the required elements to formalize important algebraic theorems. In particular, the paper presents the formalization of the general algebraic-theoretical version of the Chinese remainder theorem (CRT) for the theory of rings, as given in abstract algebra textbooks, proved as a consequence of the first isomorphism theorem. Also, the PVS theory includes a formalization of the number-theoretical version of CRT for the structure of integers, which is the version of CRT found in formalizations. CRT for integers is obtained as a consequence of the general version of CRT for the theory of rings.
Anzeige 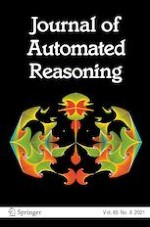 An Automatically Verified Prototype of the Tokeneer ID Station Specification