From Patches of Villages to a Municipality: Time, Space, and Expansion of Wa, Ghana | springerprofessional.de Skip to main content
SUCHE MENÜ 1 2 3 4

This article examined the mutation of Wa from patches of villages to a Municipality in Ghana and how the expansion has affected land use/land cover changes. The study was approached by first observing population growth trends over the years and overlaying satellite imageries of 1986, 2001, 2014 and 2016 to determine the extent of expansion and land use changes. Additionally, historical perspectives were explored from indigenes with accumulated knowledge to unpack the factors responsible for the expansion over space and time. The evidence revealed a continuous outward expansion while the built-up area and the population growth rate had increased over 1,130 times and 110% respectively within the period under study. The evidence further laid bare the intricate political, social and economic factors that have contributed to the changing size and morphology of the Municipality. It is argued that the trend of expansion calls for proper land use planning and proper anti-sprawl policies.
Anzeige

Vorheriger Artikel In with the New and Out with the Old? Industrial Estates and the Prospects of Manufacturing in Durban, South Africa
Nächster Artikel Residential Satisfaction Among Low-Income Earners in Government-Subsidized Housing Estates in Ogun State, Nigeria 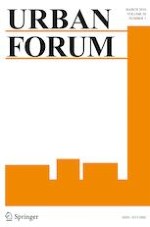 In with the New and Out with the Old? Industrial Estates and the Prospects of Manufacturing in Durban, South Africa