Based primarily on personal conversations with James M. Buchanan, this paper outlines three fundamental aspects of the Italian tradition found in Buchanan’s scholarship. The first is the particular emphasis on the role of the state. The second is the analysis of subjective cost. The third is the application of subjective cost to democratic public finance. This paper will focus on the latter two aspects, concentrating on two pioneering works on which Buchanan grounded two of his most important books written during the first part of his long career. The first is Public Principles of Public Debt, which profoundly was influenced by de Viti de Marco, the second is Cost and Choice, wherein along with de Viti de Marco, we find themes echoing Francesco Ferrara.

Titel
From subjectivism to constitutionalism: the intellectual journey of James M. Buchanan through his Italian heroes
Autor:
Giuseppe Eusepi 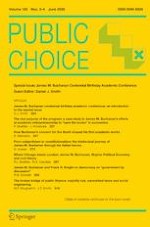 The real purpose of the program: a case study in James M. Buchanan’s efforts at academic entrepreneurship to “save the books” in economics

James M. Buchanan and Frank H. Knight on democracy as “government by discussion”

Can a contractarian be a paternalist? The logic of James M. Buchanan’s system