Functional and structural fatigue properties of a pseudoelastic NiTi alloy were analyzed at the light of local non-homogenous thermo-mechanical response, resulting from Lüder’s-like transformation bands. To this aim, in-situ full-field strain and temperature measurements were made during fatigue tests. Structural and functional fatigue damage phenomena were studied by analyzing the evolutions of strains and temperature at the sample scale as well as within the transformation bands. Marked losses in the pseudoelastic recovery capabilities were recorded, mainly occurring in the first loading cycles, leading to material stabilization after about 200 cycles. Very large differences between the two scales were observed, that is, reduction of pseudoelastic recovery at the global scale is attributed to the accumulation of residual deformation in the transformation bands. These local effects tend to vanish for strains beyond the stress-induced transformation regime, due to the saturation of martensitic bands. The effects of local deformations on the structural fatigue properties, in terms of strain-life curves, were also analyzed. It was demonstrated that localized strains play a very important role on the evolution of structural damage, especially within the pseudoelastic regime of the alloy, and they represent the key to understand unusual strain-life curves at the global scale. 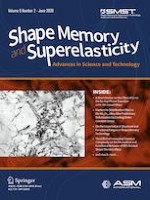