Functions of Social Representations in Honour Violence: The “Other East” as Responsible | springerprofessional.de Skip to main content
TOOLBAR 1 2 3 4
SUCHE MENÜ 1 2 3 4

Although extensive research has been carried out in the field of social justice in terms of femicide in defence of family honour around the globe, intersecting aspect of identity as an underlying psychological mechanism to justify the social sources of these killing has not been addressed in much detail. The present study, therefore, examined the role of (a) diverse social representations in femicide, (b) geography and ethnicity in social representations of honour violence, and (c) the functions of these diverse social representations in maintaining social injustice towards women through the promotion of occidentalism in line with the boundaries for a hegemonic notion of western modernisation. Two studies were conducted. The first study includes a content analysis investigating data from 73 respondents living in the western part of Turkey. The present findings showed that there are different social representations of honour killings, such as töre killings and namus killings. These diverse representations were found to reflect the fact that individuals delegitimise töre killings as eastern, outrageous, tribalistic, and related to family honour while legitimising namus killings as personal, valuable, self-aware, and vulnerable, in the context of “westernised” Turkey. The second study comprises an experimental design in which participants were randomly assigned to one of three conditions: namus killing, töre killing, and control. The results showed that diverse social representations of femicide have psychological functions such that a namus representation gives more legitimacy to femicide than does a töre representation. The consideration of diverse representations in honour killings and their functions has the potential to inform research as well as to build effective prevention policies targeting the reduction in femicides. A focus on the concept of namus and an emphasis on moving the focus of social representations away from responsible backwards, “the other East” and towards namus as one of the leading sources of domestic violence may switch the problem from the perception of victimised eastern women and to a general injustice problem.

Titel
Functions of Social Representations in Honour Violence: The “Other East” as Responsible
Autor:
Ahmet Çoymak 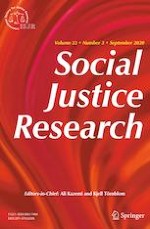 Consumers Beware: Online Personalized Pricing in Action! How the Framing of a Mandated Discriminatory Pricing Disclosure Influences Intention to Purchase