More than 1 million wells may have been completed using hydraulic fracturing techniques in the USA alone; however, there have been few case studies exploring the impacts on water resources due to methane migration. This study evaluated the results of three investigations initiated by the US Environmental Protection Agency, that were subsequently described in published studies at Dimock in Pennsylvania, Parker-Hood County in Texas, and Pavillion in Wyoming, as well as another study completed at Sugar Run in northeast Pennsylvania. In addition, earlier investigations at Shaws Corner in Pennsylvania, Jackson County in West Virginia, Garfield County in Colorado, and Bainbridge in Ohio are summarized. The most common cause of incidents was the presence of uncemented sections of production casings in wells that allowed gas migration from intermediate depths to shallow freshwater aquifers. In three cases, an inadequate depth of the primary top of cement (TOC) also contributed to impacts. Sources of methane were best identified through analyses of isotopes on samples from production casings, annular spaces, and water wells. In Dimock, some isotope signatures changed with time, after the completion of remedial actions. In Parker-Hood County, where impacts were not related to gas well activity, noble gas analyses were also needed to determine the source of gas. At Pavillion, where maximum methane concentrations in water wells were <1 mg/L, no significant impacts were documented. For all the sites, most or all of the fugitive gas incidents may have been prevented by fully cementing production casings to the land surface. 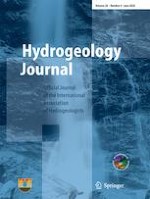 Groundwater and the discourse of shortage in Sub-Saharan Africa

Defining the hydrogeological behavior of karst springs through an integrated analysis: a case study in the Berici Mountains area (Vicenza, NE Italy)