Schindler and Itoh (Applied cryptography and network security-ACNS 2011. Lecture Notes in Computer Science, vol 6715. Springer, Berlin, pp 73–90, 2011) and Schindler and Wiemers (J Cryptogr Eng 4:213–236, 2014. doi:10.​1007/​s13389-014-0081-y) treat generic power attacks on RSA implementations (with CRT/without CRT) and on ECC implementations (scalar multiplication with the long-term key), which apply exponent blinding, resp., scalar blinding, as algorithmic countermeasure against side-channel attacks. In Schindler and Itoh (2011) and Schindler and Wiemers (2014), it is assumed that an adversary has guessed the blinded exponent bits/the blinded scalar bits independently for all power traces and for all bit positions, and each bit guess is false with probability \(\epsilon _b>0\). Three main types of attacks and several variants thereof were introduced and analysed in Schindler and Itoh (2011) and Schindler and Wiemers (2014). The attacks on RSA with CRT are the least efficient since the attacker has no information on \(\phi (p)\). In this paper, we introduce two new attack algorithms on RSA with CRT, which improve the attack efficiency considerably. In particular, attacks on blinding factors of length \(R=64\) have definitely become practical, and for small error rates \(\epsilon _b\) even \(R=96\) may be overcome. 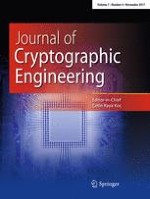 Introduction to the PROOFS 2016 special section