The term “phytoremediation” is used to describe the cleanup of heavy metals from contaminated sites by plants. This study demonstrates phytoremediation potential of Indian mustard (Brasicca juncea (L.) Czern. & Coss.) genotypes for chromium (Cr). Seedlings of 10 genotypes were grown hydroponically in artificially contaminated water over a range of environmentally relevant concentrations of Cr (VI), and the responses of genotypes in the presence of Cr, with reference to Cr accumulation, its phytotoxity and anti-oxidative system were investigated. The Cr accumulation potential varied largely among Indian mustard genotypes. At 100 μM Cr treatment, Pusa Jai Kisan accumulated the maximum amount of Cr (1680 μg Cr g−1 DW) whereas Vardhan accumulated the minimum (107 μg Cr g−1 DW). As the tolerance of metals is a key plant characteristic required for phytoremediation purpose, effects of various levels of Cr on biomass were evaluated as the gross effect. The extent of oxidative stress caused by Cr stress was measured as rate of lipid peroxidation. The level of thiobarbituric acid reactive substances (TBARS) was enhanced at all Cr treatments when compared to the control. Inductions of enzymatic and nonenzymatic antioxidants were monitored as metal-detoxifying responses. All the genotypes responded to Cr-induced oxidative stress by modulating nonenzymatic antioxidants [glutathione (GSH) and ascorbate (Asc)] and enzymatic antioxidants [superoxide dismutase (SOD), ascorbate peroxidase (APX), and glutathione reductase (GR)]. The level of induction, however, differed among the genotypes, being at its maximum in Pusa Jai Kisan and its minimum in Vardhan. Pusa Jai Kisan was grown under natural field conditions with various Cr treatments, and Cr-accumulation capacity was studied. The results confirmed that Pusa Jai Kisan is a hyperaccumulator of Cr and hypertolerant to Cr-induced stress, which makes this genotype a viable candidate for use in the development of phytoremediation technology of Cr-contaminated sites. 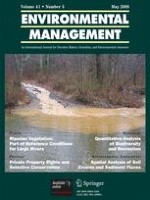 An Examination of Governance Arrangements at Kisakasaka Mangrove Reserve in Zanzibar

Modeling the Effects of Potential Salinity Shifts on the Recovery of Striped Bass in the Savannah River Estuary, Georgia–South Carolina, United States