Geochemical investigations were carried out to define the origin of the low- to moderate-temperature thermal waters feeding the Monfalcone springs in northern Italy. Chemical data indicate that waters approach the composition of seawater. Mixing processes with cold low-salinity waters are highlighted. The δ18O and δD values are in the range −5.0 to −6.4 ‰, and −33 to −40 ‰, respectively, suggesting the dilution of the saline reservoir by karst-type freshwaters. A surplus of Ca2+ and Sr2+ ions with respect to a conservative mixing is ascribed to diagenetic reactions of the thermal waters with Cretaceous carbonates at depth. The measured Sr isotopic composition (87Sr/86Sr ratio) ranges between 0.70803 and 0.70814; after correction for the surplus Sr, a 87Sr/86Sr ratio indicating Miocene paleo-seawater is obtained. The dissolved gases indicate long-lasting gas–water interactions with a deep-originated gas phase of crustal origin, dominated by CO2 and marked by a water TDIC isotopic composition in the range −5.9 to−8.8 and helium signature with 0.08 < R/Ra < 0.27, which is a typical range for the crust. A possible scenario for the Monfalcone thermal reservoir consists of Miocene marine paleowaters which infiltrated through the karstic voids formed within the prevalently Cretaceous carbonates during the upper Eocene emersion of the platform, and which were entrapped by the progressive burial by terrigenous sediments. 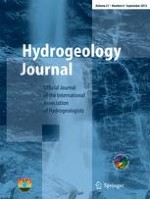 Carbon-14 age and chemical evolution of Ca(HCO3)2-type groundwater of age less than 8,000 years in a confined sandy and muddy Pleistocene aquifer, Japan

The return of groundwater quantity: a mega-scale and interdisciplinary “future of hydrogeology”?