Tile-based self-assembly systems are capable of universal computation and algorithmically directed growth. Systems capable of such behaviors typically make use of “glue cooperation” in which the glues on at least 2 sides of a tile must match and bind to those exposed on the perimeter of an assembly for that tile to attach. However, several models have been developed which utilize “weak cooperation”, where only a single glue needs to bind but other preventative forces (such as geometric, or steric, hindrance) provide additional selection for which tiles may attach, and where this allows for algorithmic behavior. In this paper we first work in a model where tiles are allowed to have geometric bumps and dents on their edges. We show how such “geometric” tiles can simulate systems of square tiles with complex glue functions (using asymptotically optimal sizes of bumps and dents). We then show that at scale factor 1 it is impossible for geometric tiles to simulate the behavior of systems which can include duples (i.e. tiles either twice as long or twice as tall as square tiles), and also that with only weak cooperation via geometric hindrance, no system in any model can simulate even a class of tightly constrained, deterministic cooperative systems. This helps to further define the limits of the powers of systems relying on geometric hindrance instead of glue cooperation.A shortened version of this paper appeared in the proceedings of the 18th International Conference on Unconventional Computation and Natural Computation (UCNC 2019). 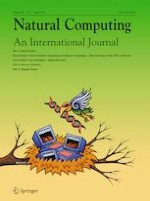 The representational entity in physical computing