Semnan thermal springs with high TDS and moderate temperature are located northwest of Semnan, the northern part of Iran. The spatial and temporal variations of physicochemical characteristics of the thermal and cold springs were investigated for the recognition of origin and dominant hydrogeochemical processes. Results show that the thermal springs have the same origin, but due to different ascending flow paths and different conductive cooling mechanism, their temperatures vary. The chemical composition of thermal waters is controlled by dolomite, halite and sulfate minerals dissolution and calcite precipitation and bacterial sulfate reduction. The concentration of major and trace elements in the thermal springs does not change in wet and dry seasons notably because they are derived from old groundwater with deep circulation and high temperature. Seasonal change in the concentration of some trace elements is due to the seasonal variation of pH, Eh, temperature and dilution by shallow waters. Decreasing SO4 and carbonate saturation index and increasing Na/Cl ratios and Ca content in the dry season show dilution effect caused by the previous heavy rainfall events. The temperature of the heating reservoir based on K–Mg, chalcedony, quartz and chemical equilibrium approach was approximately estimated in the range of 60–80 °C. Hydrogeologically, a conceptual model was suggested for the thermal springs. The general groundwater flow direction is probably from the dolomite Lar Formation in Chenaran anticline toward the adjacent syncline in a confined condition, and then a thrust fault acts as a conduit and redirects the thermal water to the emerging springs at the surface. 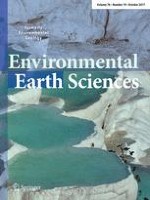 Treatment of agricultural wastes with biogas–vermitechnology

Spectrum of climate change and streamflow alteration at a watershed scale

Modified acid–base accounting model validation and pH buffer trend characterisation in mine drainage at the AngloGold Ashanti Obuasi mine in Ghana, West Africa