We study the effects of the 2008–2009 global economic crisis on the household experience of bribing public officials. The data come from the Life in Transition-2 survey, conducted in 2010 in 30 post-socialist economies of Central and Eastern Europe and Central Asia. We find that households hit by crisis are more likely to bribe and, among people who bribe, crisis victims bribe a wider range of public officials than non-victims. The crisis victims are also more likely to pay bribes because public officials ask them to do so and less likely because of gratitude. The link between crisis and bribery is stronger in the poorest countries of the region. Our findings support the conjecture that public officials misuse sensitive information about crisis victims to inform bribe extortion decisions. 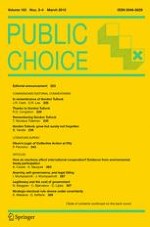 The rule of law and constitutionalism in Muslim countries

William R. Keech, Economic Politics in the United States: The Costs and Risks of Democracy