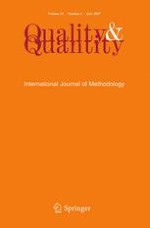 Suicide and socioeconomic determinants in Canada: beyond morality and philosophy

Quality and quantity in the innovation process of firms: a statistical approach