During the last decades, a globalized and free market economy has become the worldwide accepted paradigm for organizing economic affairs. Indeed many positive effects of globalization have materialized and improved the wellbeing of humans, particularly in the poorer parts of the world. However, there is a dark side to globalization—negative external effects, e.g. the exploitation and destruction of natural resources—that is causing growing discontent (e.g. Stiglitz, Globalization and its discontents. Penguin, London, 2002). Different initiatives have been taken in order to deal with the deficits of globalization but have not yet resulted in a resounding success. This paper deals with the downsides of globalization and is not telling a “success story”. For this reason, it is a scholarly article and an essay at the same time, dealing with its subject sometimes from a personal point of view. After presenting some examples for negative side effects of our current economic system, it is argued that capitalism is not only promoting growth through innovation, but that it follows a path of greed and exploitation. Building on path dependence theory, self-reinforcing mechanisms are identified that lead into a lock-in of the current path and make it hard to alter its course. Against this background, three suggestions to tackle the deficits of globalization are presented and critically discussed—the Principles for Responsible Education (PRME), the attempt to restrict globalization (e.g. Steingart), and the implementation of a global governance system (e.g. Homann). Finally, a careful conclusion is drawn: A sequenced approach of education, sanction, and institution building might be the best solution to fasten up the slow moving process of fixing the shortcomings of globalization. It has to be clearly understood that this is not a contribution aimed against globalization and global competition. However, the issues raised in this article urgently need to be addressed. It logically follows that further research is needed in time.
Anzeige
Vorheriger Artikel On self-interest and greed
Nächster Artikel The power of “mapping the territory”. Why economists should become more aware of the performativity of their models

From January 2013, the Zeitschrift für Betriebswirtschaft (ZfB) is published in English under the title Journal of Business Economics (JBE). The Journal of Business Economics (JBE) aims at encouraging theoretical and applied research in the field of business economics and business administration, promoting the exchange of ideas between science and practice. 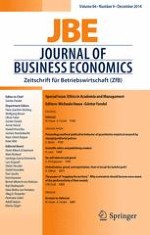 The power of “mapping the territory”. Why economists should become more aware of the performativity of their models

On self-interest and greed