A failure analysis was performed on a length of API 5CT Grade P110 tubing that failed while being used in a drilling operation. Approximately 10 feet of the tubing was shredded by axial slits, and there were collapsed zones above and below the failure. The slits were at 45° to the tubing surface and showed very fine microvoid coalescence. Metallographic examination showed that the slits had formed along adiabatic shear bands. The presence of adiabatic shear bands indicated an extremely high strain rate. That, combined with the orientation of the slits, indicated that the failure was caused by a detonation of gasses in the annulus surrounding the tubing. Well operations responsible for the detonation will be briefly addressed. 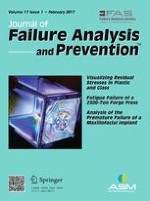 Study on Microstructure and Properties of 20MnMoNb Steel by Gas Oxynitriding

Analytical Reconstruction of Failure of a Shell and Tube Heat Exchanger