“Banded structures” of macroscopic dimensions can be induced by simple shear flow in many different types of soft matter systems. Depending on whether these bands extend along the gradient or vorticity direction, the banding transition is referred to as “gradient banding” or “vorticity banding,” respectively. The main features of gradient banding can be understood on the basis of a relatively simple constitutive equation. This minimal model for gradient banding will be discussed in some detail, and its predictions are shown to explain many of the experimentally observed features. The minimal model assumes a decrease of the shear stress of the homogeneously sheared system with increasing shear rate within a certain shear-rate interval. The possible microscopic origin of the severe shear-thinning behaviour that is necessary for the resulting nonmonotonic flow curves is discussed for a few particular systems. Deviations between experimental observations and predictions by the minimal model are due to obvious simplifications within the scope of the minimal model. The most serious simplifications are the neglect of concentration dependence of the shear stress (or on other degrees of freedom) and of the elastic contributions to the stress, normal stresses, and the possibility of shear-induced phase transitions. The consequences of coupling of stress and concentration will be analyzed in some detail. In contrast to predictions of the minimal model, when coupling to concentration is important, a flow instability can occur that does not require strong shear thinning. Gradient banding is sometimes also observed in glassy- and gel-like systems, as well as in shear-thickening systems. Possible mechanisms that could be at the origin of gradient-band formation in such systems are discussed. Gradient banding can also occur in strongly entangled polymeric systems. Banding in these systems is discussed on the basis of computer simulations. Vorticity banding is less well understood and less extensively investigated experimentally as compared to gradient banding. Possible scenarios that are at the origin of vorticity banding will be discussed. Among other systems, the observed vorticity-banding transition in rod-like colloids is discussed in some detail. It is argued, on the basis of experimental observations for these colloidal systems, that the vorticity-banding instability for such colloidal suspensions is probably related to an elastic instability, reminiscent of the Weissenberg effect in polymeric systems. This mechanism might explain vorticity banding in discontinuously shear-thickening systems and could be at work in other vorticity-banding systems as well. This overview does not include time-dependent phenomena like oscillations and chaotic behaviour. 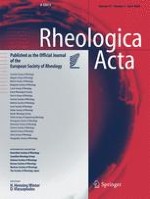 Uniform flow of viscoelastic fluids past a confined falling cylinder