In this paper the conventional finite element method for linear elastic response is reformulated in such a way that makes it favorable for the study of damage and fracture in brittle materials. This modified finite element framework is based on the idea presented by Reddy and Srinivasa (Finite Elem Anal Des 104:35–40, 2015), where it was shown that for discretized hyperelastic materials, the magnitude of the nodal forces (in the discretized form) can be written in terms of the axial strains along the edges of the elements and that the equilibrium equations at each node can be written in terms of the forces along the edges alone. Using this concept and by exploiting the fact that FEM discretization leads to an undirected cyclic graph with nodes and edges whose connectivity is related to the elements of the FEM, one can reformulate the displacement-based finite element framework with constant strain triangular elements to represent the continuum as a nonlocal network. The network representation of the continuum is “nonlocal” in the sense that the force along any given edge doesn’t only depend on the strain along that edge, but on a collective behavior of the strains along the edges neighboring the edge of interest. This method is named as GraFEA (for graph-based finite element analysis). Damage is introduced using a nonlocal damage criterion originating from the idea of the weakest links statistics proposed by Lin, Evans, and Ritchie (J Mech Phys Solids 34(5):477–497, 1986). This idea, which was very successful in studying cleavage fracture of mild steel at very low temperatures, can be used to impose a damage criterion to the nolocal network. GraFEA has the major advantage that one can impose an edge-based failure criterion using the weakest link thoery directly on the discretized body, and potentially simulating crack initiation, crack growth, and branching without the need for extra enrichment functions (as with other methods). The simplicity of the method and the fact that it is based on conventional finite element method makes it suitable for integration into commercial softwares. The governing equations for this approach are derived and applied to two simple crack growth simulations (as a proof of concept) in two-dimensional regions with a hole. 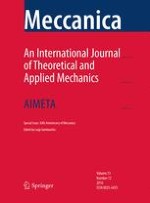 Stress due to the intercalation of lithium in cubic-shaped particles: a parameter study