Instead of alleviating fiscal inequalities, intergovernmental grants are often used to fulfill the grantors’ political goals. This study uses a unique panel dataset on more than 500 Croatian municipalities over a 12-year period to uncover the extent to which grant distribution is biased owing to grantors’ electoral concerns. Instead of the default fixed effects approach to modelling panel data, we apply a novel within-between specification aimed at uncovering the contextual source of variation, focusing on the effects of electoral concerns on grant allocation within and between municipalities. We find evidence of a substantial political bias in grant allocations both within and between municipalities, particularly when it comes to local-level electoral concerns. The paper offers researchers a new perspective when tackling the issue of politically biased grant allocation using panel data, particularly when they wish to uncover the simultaneous impact of time-variant and time-invariant factors, or when they cannot apply a quasi-experimental approach because of specific institutional contexts. 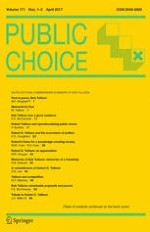 The political economy of sales taxes and sales tax exemptions

Robert D. Tollison and the economics of politics

Bob Tollison was a good sentence