The maleated sulfur-prevulcanized natural rubber (M-SPNR) was prepared from grafting maleic anhydride (MA) onto SPNR latex particle by using benzoyl peroxide as an initiator. Natural rubber latex particle was vulcanized first, and then it was maleated to M-SPNR. The average particle size of M-SPNR was greater than that of SPNR possibly due to the formation of aggregate after addition of MA. The symmetric (strong) and asymmetric (weak) carbonyl stretching vibrations of succinic anhydride rings were confirmed by ATR–FTIR at 1,780–1,784 and 1,854 cm−1, respectively. The swelling ratios of M-SPNR latex film decreased with increasing MA contents. The tensile strength, modulus, hardness, and elongation at break of SPNR latex film dramatically increased after grafting with MA. Due to the reduction of double bond, the thermal stability of M-SPNR film was better than that of SPNR. The environmental friendly M-SPNR would be further applied as a compatibilizer between NR and biopolymer. 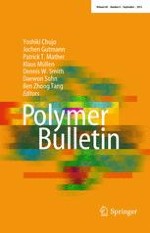