Groundwater Mass Balance in Urbanized Areas Estimated by a Groundwater Flow Model Based on a 3D Hydrostratigraphical Model: the Case Study of the Eastern Plain of Naples (Italy) | springerprofessional.de Skip to main content
TOOLBAR 1 2 3 4
SUCHE MENÜ 1 2 3 4

Since 2001, a rising water table occurred in the eastern part of the city of Naples (Italy), leading to flooding of the foundations of many buildings and of the underground infrastructures (garages, subway tracks, etc.). This resulted from the reduction in the exploitation of water for industrial use and drinking water in the central part of the groundwater body of the eastern plain of Naples: the groundwater withdrawal decreased from up to 3 m3/s in 1990 to a few hundred litres per second in 1998. The variation of piezometric levels led to flooding of foundations of many buildings and of underground infrastructures, this is a big amount of water lost by the aquifer system and that should be evaluated. In order to assess aquifer hydraulic features and the groundwater quantitative status, a 3D hydrostratigraphic model reconstruction was developed to support the groundwater flow modeling and the evaluation of the groundwater balance. The 3D hydrostratigraphic model reconstructed the subsoil of the study area: layers of tuff and lenses of peat, which play an important hydrogeologic role as aquitard and aquiclude, are faithfully defined. Indeed, the model allows the depiction of the horizontal extension and of the thickness of each hydrofacies, even if strongly heteropic. The groundwater flow model was defined using the 3D hydrostratigraphic model in the construction of the geometry and assignment of hydrodynamic parameters. The calibration and sensitivity analysis prove the goodness of the assigned hydraulic conductivity values. The model, together with a detailed computation of the paved areas with reduced infiltration, evaluated the recharge in 0.101 m3/s. The model calibration assessed an evapotranspiration rate lower than the prefixed value, probably due to the absence of vegetation that restricts the phenomenon almost exclusively to evaporation. Moreover, the calibration of the model confirmed: − the assumed groundwater flow towards the sea in 0.313 m3/s; − the hypothesized amount of the subsurface inflow from upstream in 0.504 m3/s. A considerable amount of water lost by the aquifer system, about 0.315 m3/s, could be used by Municipality for different public uses. 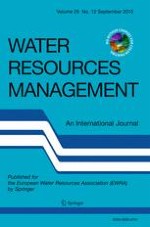