We consider the problem of hedging a European contingent claim in a Bachelier model with temporary price impact as proposed by Almgren and Chriss (J Risk 3:5–39, 2001). Following the approach of Rogers and Singh (Math Financ 20:597–615, 2010) and Naujokat and Westray (Math Financ Econ 4(4):299–335, 2011), the hedging problem can be regarded as a cost optimal tracking problem of the frictionless hedging strategy. We solve this problem explicitly for general predictable target hedging strategies. It turns out that, rather than towards the current target position, the optimal policy trades towards a weighted average of expected future target positions. This generalizes an observation of Gârleanu and Pedersen (Dynamic portfolio choice with frictions. Preprint, 2013b) from their homogenous Markovian optimal investment problem to a general hedging problem. Our findings complement a number of previous studies in the literature on optimal strategies in illiquid markets as, e.g., Gârleanu and Pedersen (Dynamic portfolio choice with frictions. Preprint, 2013b), Naujokat and Westray (Math Financ Econ 4(4):299–335, 2011), Rogers and Singh (Math Financ 20:597–615, 2010), Almgren and Li (Option hedging with smooth market impact. Preprint, 2015), Moreau et al. (Math Financ. doi:10.​1111/​mafi.​12098, 2015), Kallsen and Muhle-Karbe (High-resilience limits of block-shaped order books. Preprint, 2014), Guasoni and Weber (Mathematical Financ. doi:10.​1111/​mafi.​12099, 2015a; Nonlinear price impact and portfolio choice. Preprint, 2015b), where the frictionless hedging strategy is confined to diffusions. The consideration of general predictable reference strategies is made possible by the use of a convex analysis approach instead of the more common dynamic programming methods. 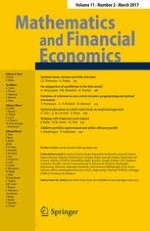 On uniqueness of equilibrium in the Kyle model

Existence of solutions in non-convex dynamic programming and optimal investment

Optimal placement in a limit order book: an analytical approach