We propose a new protocol of hierarchical quantum information splitting (HQIS) via two four-qubit cluster state. In the protocol, a boss can asymmetrically distribute an arbitrary two-qubit state, which has not been investigated by the previous papers, to the distant agents in a network. The asymmetric distribution leads to that the agents’ authorities for getting the secret state are hierarchical. In other word, they have different authorities for the boss’s secret state. Moreover, the symmetry feature of cluster state reflects our protocol will have a better extendibility. Thus, we further propose a multiparty HQIS protocol. In our HQIS protocol, the agents only need the single-qubit measurement, which is an appealing advantage in practically implementation. Meanwhile, the present protocol can be modified to implement the threshold-controlled teleportation. 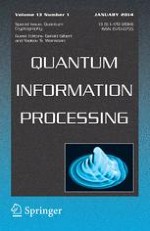 A sessional blind signature based on quantum cryptography