The long-term oxidation resistance of the Fe–14Cr–2W–0.3Ti–0.3Y2O3 oxide dispersion strengthened reduced activation ferritic steel was investigated. The results of the long-term oxidation at 750 °C for 10000 h in air revealed that the weight gain of the ODS ferritic steel was exceptionally low (<3.5 × 10−3 g/cm−2) and that the long-term oxidation rate follows the parabolic law. The parabolic rate constant, which was calculated from the mass change during the ageing process was equal to 2.0 × 10−9 g2/cm4 h. The scanning electron microscopy (SEM) observations of the cross section of the specimen after being aged for 10000 h revealed an oxide scale with the non-uniform thickness ranging from 2.0 to 5.0 μm enriched with Cr–Mn oxide. On the contrary to the SEM observations of the ODS steel scale following the annealing process at 1350 °C, it was revealed that the material had a multi-layer scale with the thickness equal to ~20 μm. The outer layer, with the approximate thickness of 15 μm, was mainly composed of 30Fe–22Cr–8W–2Si–38O (in wt%), whereas the inner part of the layer was predominantly made of 76Fe–14Cr–2W–10O. 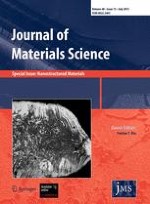