In recent years, nations, states and provinces have been proactively combating climate change, supported by the 21st Conference of the Parties of the United Nations Framework Convention on Climate Change (UNFCCC) outcomes. In the meantime, several studies have evaluated regional strategies for greenhouse gas (GHG) mitigation. Although these studies propose scenarios that meet the climate policy pledges, most of them are based on measures that have not been commercially demonstrated yet, such as carbon capture and storage (CCS). The aim of this work is to develop a low-carbon scenario for the energy sector in Sao Paulo, Brazil (whose emissions are significant at the regional and national level) until 2050 and to verify if a proven, technology-based approach meets the current policy goals. Although the analysis is based on a developing country, Sao Paulo state is the most developed region in Brazil. Consequently, the analysis presented in this work may be replicated in other regional settings, with distinct development stages, which demand increasing energy futures. In the business-as-usual (BAU) scenario, energy demand increases 2.6% per year until 2050, and emissions consequently increase 2.8% per year, reaching 235 million metric tons of carbon dioxide (tCO2). If four alternatives proposed in the low-carbon (LC) scenario were implemented, 28% of the BAU emissions would be avoided. However, even with this LC scenario, Sao Paulo would not meet the state pledge, remaining 44% above the policy emission cap. This result means that more audacious measures are needed to achieve an effective result. Such measures must push the current technical, scientific, and industrial knowledge and may require a biodiesel share over 20% in diesel blend, extensive increases in renewable energy supply, CCS, and bioenergy associated with CCS. Finally, we suggest some key points to apply this analysis in other regions, considering their own energy mix. 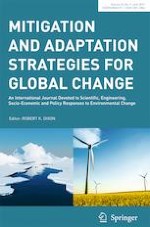 Representative agricultural pathways, climate change, and agricultural land uses: an application to the Pacific Northwest of the USA

Greening the one belt and one road initiative