Subjective well-being research has often found that marriage is positively correlated with well-being. Some have argued that this correlation may be result of happier people being more likely to marry. Others have presented evidence suggesting that the well-being benefits of marriage are short-lasting. Using data from the British Household Panel Survey, we control individual pre-marital well-being levels and find that the married are still more satisfied, suggesting a causal effect at all stages of the marriage, from pre-nuptual bliss to marriages of long-duration. Using new data from the United Kingdom’s Annual Population Survey, we find that the married have a less deep U-shape in life satisfaction across age groups than do the unmarried, indicating that marriage may help ease the causes of the mid-life dip in life satisfaction and that the benefits of marriage are unlikely to be short-lived. We explore friendship as a mechanism which could help explain a causal relationship between marriage and life satisfaction, and find that well-being effects of marriage are about twice as large for those whose spouse is also their best friend. 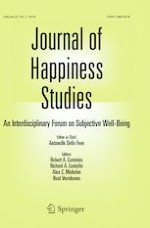 Capturing Affective Well-Being in Daily Life with the Day Reconstruction Method: A Refined View on Positive and Negative Affect

Be There For Me and I Will Be There For You: Friendship Maintenance Mediates the Relationship Between Capitalization and Happiness

Always Look on the Bright Side of Life: Religiosity, Emotion Regulation and Well-Being in a Jewish and Christian Sample

The Role of Buddhist Practices in Happiness and Health in Thailand: A Structural Equation Model