The paper presents a renewed Habermasian view on transnational multi-stakeholder initiatives (MSIs) and assesses the institutional characteristics of the Equator Principles Association (EPA) from a deliberative democracy perspective. Habermas’ work has been widely adopted in the academic literature on the political responsibilities of (multinational) corporations (i.e., political corporate social responsibility), and also in assessing the democratic qualities of MSIs. Commentators, however, have noted that Habermas’ approach relies very much on ‘nation-state democracy’ and may not be applicable to democracy in MSIs—in which nation-states are virtually absent. We argue that Habermas’ detailed conceptualization of the institutionalization of deliberative democracy can be applied to transnational MSIs if these initiatives can be said to have their own ‘dèmoi’ that can be represented in associational decision-making. Therefore, we develop a definition of the dèmos of an MSI based on the notion of collective agency. Subsequently, we explain how Habermas’ approach to democracy can be applied to MSIs and show that it has more to offer than hitherto has been uncovered. Our illustrative analysis of the EPA confirms the criticisms regarding this MSI which have recently been articulated by researchers and practitioners, but also yields new findings and possible avenues for the further development of the EPA: That is, although our assessment suggests that the EPA in its current state is still far from being a democratic MSI, the possibility of a sensible analysis of its democratic character indicates that transnational MSIs can, in principle, help to fill governance gaps in a democratic way. 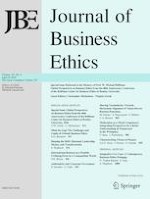 Accountability in an Independent Regulatory Setting: The Use of Impact Assessment in the Regulation of Financial Reporting in the UK

International Business as a Possible Civilizing Force in a Cosmopolitan World

A Normative Argument for Independent Voice and Labor Unions

Erratum to: Shame on You: When Materialism Leads to Purchase Intentions Toward Counterfeit Products