The contribution by Hubert L. Dreyfus to the debate on the feasibility of AI projects has been surely of great relevance because of his pointing out specific limits of the machine as compared to the human mind. His critics, along with the actual difficulties encountered in the advance of a pure symbolic AI, induced a wide discussion that in some measure stimulated other ways to follow for reproducing human abilities. Nevertheless, a curious fact characterizes the history of AI regarding the problems raised, among the many, by Dreyfus. While in the first era the main concern by the opponents was to certify the limited power of computers as compared to humans, it seems that today the main concern is exactly the opposite, namely the growing and threatening power of AI devices, both software and hardware based, such as robots. Maybe the reason of that has been, and is today too, the imbalance assigned to the discussion, on the one side, of what human faculties are and work, and, on the other, on what the artificial is and can work. Designing the artificial, in every field, means to give birth to devices that consist of a sort of overlapping of nature and technology, and, therefore, they deserve to be named naturoids. This implies that, to understand them, we need to study their genuine ‘artificial nature’ in general terms, bringing further what H. A. Simon called the ‘science of the artificial’.

Titel
Hubert Dreyfus, the artificial and the perspective of a doubled philosophy
Autor:
Massimo Negrotti 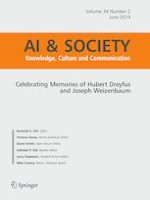 Introduction to The Last Dream by Joseph Weizenbaum

From Bacteria to Bach and Back

Dreyfus on the “Fringe”: information processing, intelligent activity, and the future of thinking machines