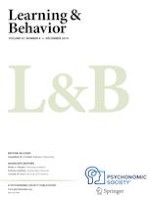 Midsession reversal learning by pigeons: Effect on accuracy of increasing the number of stimuli associated with one of the alternatives

Smarter through group living: A response to Smulders

The push and pull of dopamine in cue-reward learning