In the inverse groundwater modelling problems, the objective functions generally used contain several local minima which render the conventional gradient-based optimization unsuitable for such problems. The recently used individual population-based evolutionary methods such as differential evolution (DE) algorithm and particle swarm optimization (PSO) are often observed to get stuck into sub-optimal solution. In this study to address this issue, a hybrid- metaheuristic Differential Evolution- Particle Swarm Optimization (DE-PSO) is proposed to obtain aquifer parameters. PSO introduces a perturbation in each generation to increase the diversity in the population of DE to improve its fitness value. The developed hybrid DE-PSO optimization is coupled with finite element method (FEM) based simulator to get a simulation-optimization (SO) model. Initially, the proposed SO model is tested on a synthetic irregular domain problem to estimate aquifer transmissivity values which are compared with available zonation pattern values. Later, the SO model is applied to the Mahi Right Bank Canal (MRBC) heterogeneous unconfined aquifer system and the optimally obtained results are compared with the DE, PSO and genetic algorithm (GA) methods respectively. The performance of the hybrid DE-PSO model is also tested using various fit- independent statistics for the reliability and accuracy. The results of this study show that the hybrid-metaheuristic based DE-PSO optimization algorithm is an efficient and robust tool for inverse groundwater problem of estimating the aquifer parameters. 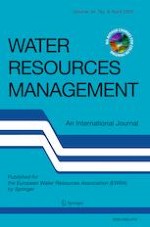