In this paper, we develop an efficient multiscale molecular dynamics (MD)–finite element (FE) modeling scheme capable of determining the elastic and fracture properties of polycrystalline graphene. The local elastic properties of a grain boundary (GB) connecting two adjacent graphene grains, with different lattice orientations, were first determined using MD simulations. In a two-dimensional medium, randomly distributed grains connected with GBs were then created using the Voronoi tessellation method. The constructed Voronoi diagrams were used to create FE models of the polycrystalline graphene, where the GBs were represented by interphase regions with their local properties determined using MD. The grains were modeled as pristine graphene and the accuracy of the polycrystalline FE model was validated with MD simulations of a geometrically identical polycrystalline graphene. The results reveal good agreement between MD and FE simulations. They further show that the elastic and fracture properties of polycrystalline graphene are greatly influenced by the grain size and the misorientation angle. They also indicate that the predicted elastic properties are in agreement with earlier reported experimental and MD results. We believe that this newly proposed multiscale scheme could be easily integrated into current design software to model graphene based nano- and micro-devices. 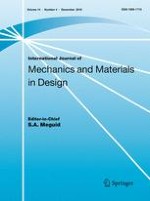