Hybrid silica-organic material with fixed n-propylamine groups was prepared by a sol–gel route and characterized by several techniques. Specific surface area of the material was 110 ± 2 m2 g−1, specific pore volume was 0.90 ± 0.01 cm3 g−1, and average pore size was 25 ± 3 nm. The specific concentration of attached amino groups was 3.28 ± 0.05 mmol g−1, the amount of residual silanol groups being comparable with that of amino groups. The maximum attainable adsorption of H+ ions was 2.34 ± 0.10 mmol g−1. The Dimroth–Reichardt normalized polarity parameter of the near-surface layer was 0.64 that points to the closeness of properties of the near-surface layer to those of water-organic mixtures and polar organic solvents rather than aqueous solutions. Surface probing with H+ ions has revealed that due to interactions between surface amino groups and weakly acidic silanol groups the protonization constants of fixed amino groups are considerably smaller than the protonization constants of aliphatic amines in aqueous solutions. The equimolecular composition of Cu (II) complexes with immobilized amino groups was concluded from the results of surface probing with Cu2+ ions and UV–vis diffuse reflectance spectroscopy. The stability constants of Cu (II) complexes were determined with the aid of the model of polydentate binding, and the influence of strong negative cooperativity effects on the adsorption equilibria was detected. The material with sorbed Cu (II) ions was used to prepare a working electrode for the electrochemical determination of nitrite ions. The electrocatalytic determination of nitrite ions in aqueous media may be performed by means of cyclic voltammetry, differential pulse voltammetry and chronoamperometry with the limits of detection 1.3, 4.6, and 3.1 μmol l−1, correspondingly. 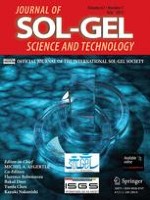