Hydraulic fracturing is a method used for the production of unconventional gas resources. Huge amounts of so-called fracturing fluid (10,000–20,000 m3) are injected into a gas reservoir to create fractures in solid rock formations, upon which mobilised methane fills the pore space and the fracturing fluid is withdrawn. Hydraulic fracturing may pose a threat to groundwater resources if fracturing fluid or brine can migrate through fault zones into shallow aquifers. Diffuse methane emissions from the gas reservoir may not only contaminate shallow groundwater aquifers, but also escape into the atmosphere where methane acts as a greenhouse gas. The working group “Risks in the Geological System” as part of ExxonMobil’s hydrofracking dialogue and information dissemination processes was tasked with the assessment of possible hazards posed by migrating fluids as a result of hydraulic fracturing activities. In this work, several flow paths for fracturing fluid, brine and methane are identified and scenarios are set up to qualitatively estimate under what circumstances these fluids would leak into shallower layers. The parametrisation for potential hydraulic fracturing sites in North Rhine-Westphalia and Lower Saxony (both in Germany) is derived from literature using upper and lower bounds of hydraulic parameters. The results show that a significant fluid migration is only possible if a combination of several conservative assumptions is met by a scenario. 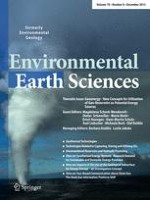 Thermal, mechanical and chemical influences on the performance of optical fibres for distributed temperature sensing in a hot geothermal well