The hydrodechlorination reactions of CCl4 have been studied over Pt/HZSM-5, Pt/HY, Pd/HZSM-5 and Pd/HY under hydrogen atmosphere in the 393–673 K temperature range in a pulse microreactor. The catalysts were prepared by impregnation and were characterised by various physico-chemical means. It has been found that all catalysts were active in the partial to full dechlorination reactions. Typically, over the Pt-containing catalysts methane was the major dechlorinated product, while it was ethane over the Pd-containing catalysts. This latter product predominated over the Pd/HZSM-5 and the quantities of the di- and trichlorinated products were minimal and the monochlorinated one was not formed at all. Phosgene formed was the indication of the partial destruction of the support being more serious for the HY-supported ones. 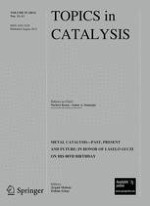 Conversion of Synthesis Gas to Dimethylether Over Gold-based Catalysts

Synergy of Components in CuZnO and CuZnO/Al2O3 on Methanol Synthesis: Analysis at the Site Level by SSITKA