This study was conducted to assess the suitability of groundwater resources for drinking and irrigating purposes in Hamedan–Bahar Plain, west of Iran as a major agricultural district, in the spring and summer of 2018. In so doing, a total of 60 water specimens were collected from the semi-deep water wells of the study area with an average depth of 50–75 m and then the hydrogeochemical characteristics of groundwater samples and their suitability were investigated. The evaluation of the groundwater quality was carried out by assessing the physicochemical variables notably temperature (T), pH, electrical conductivity (EC), total dissolved solids (TDS), total hardness (TH), and by measuring the rates of major ions including Ca2+, Cl−, HCO3−, K+, Mg2+, Na+, NO3−, PO43−, and SO42− and trace elements, such as arsenic (As), cadmium (Cd), chromium (Cr), copper (Cu), iron (Fe), manganese (Mn), nickel (Ni), lead (Pb), and zinc (Zn). The results indicated that the groundwater specimens were somewhat alkaline and brackish. The cationic trend of the specimens in the spring season was found to be Ca > Mg > Na > K > Pb > As > Cu > Zn > Ni > Fe > Cr > Mn > Cd, while, in the summer season it manifested itself as Ca > Mg > Na > As > K > Pb > Cu > Zn > Fe > Ni > Cr > Mn > Cd. However, the trend of anionic contents in both seasons was HCO3 > NO3 > SO4 > Cl > PO4. The analysis of the data showed that Na–Cl–HCO3 was the dominant groundwater type in both seasons. The studied specimens were also described in terms of some indices, including the total hardness (TH), Kelley’s ratio (KR), magnesium hazard (MH), permeability index (PI), the residual sodium carbonate (RSC), sodium adsorption ratio (SAR), soluble sodium percentage (SSP), and maximum permissible limit (MPL). The results indicated that groundwater samples have suitable quality for the main uses. Based on the values obtained for chloro-alkaline indices (CAI-1 and CAI-2), chemical weathering was suggested as the main hydrogeochemical process controlling calcium, magnesium, sulfate, and carbonate distribution in the groundwater supplies. 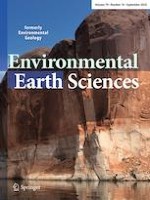