Major element concentrations and stable (δ18O and δ2H) and radiogenic (3H and 14C) isotopes in groundwater have proved useful tracers for understanding the geochemical processes that control groundwater mineralization and for identifying recharge sources in the semi-arid region of Sfax (southeastern Tunisia). Major-ion chemical data indicate that the origins of the salinity in the groundwater are the water–rock interactions, mainly the dissolution of evaporitic minerals, as well as the cation exchange with clay minerals. The δ18O and δ2H relationships suggest variations in groundwater recharge mechanisms. Strong evaporation during recharge with limited rapid water infiltration is evident in the groundwater of the intermediate aquifer. The mixing with old groundwater in some areas explains the low stable isotope values of some groundwater samples. Groundwaters from the intermediate aquifer are classified into two main water types: Ca-Na-SO4 and Ca-Na-Cl-SO4. The high nitrate concentrations suggest an anthropogenic source of nitrogen contamination caused by intensive agricultural activities in the area. The stable isotopic signatures reveal three water groups: non-evaporated waters that indicate recharge by recent infiltrated water; evaporated waters that are characterized by relatively enriched δ18O and δ2H contents; and mixed groundwater (old/recent) or ancient groundwater, characterized by their depleted isotopic composition. Tritium data support the existence of recent limited recharge; however, other low tritium values are indicative of pre-nuclear recharge and/or mixing between pre-nuclear and contemporaneous recharge. The carbon-14 activities indicate that the groundwaters were mostly recharged under different climatic conditions during the cooler periods of the late Pleistocene and Holocene. 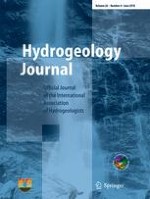 Revisiting groundwater overdraft based on the experience of the Mancha Occidental Aquifer, Spain

Simplification of the Gardner model: effects on maximum upward flux in the presence of a shallow water table