Routing is one of the major challenges in cognitive radio ad hoc networks. In finding new routes, not only the less impacted paths due the primary user activity, but also bottleneck formations over time in the secondary network and multiple connections initiated by the secondary users are important issues to be investigated. Besides, route search confined to a small fraction of all possible paths can lead to miss the appropriate one. This paper introduces a hybrid method employing three atomic metrics related to route stability, congestion awareness and path diversity based on active connections. Also, the number of alternative paths is kept on a limited scale which avoids the emergence of excessive traffic load in the network. The simulation results demonstrate the effectiveness of the proposed approach in terms of packet delivery ratio, end-to-end delay and throughput. It is also shown that the performance of our routing mechanism outperforms the existing baseline schemes. 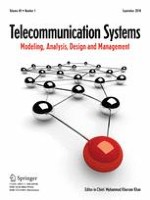 Implications of the regulation in the implantation process of next generation networks in Spain: analysis in rural versus urban regions

A survey of hybrid MAC protocols for machine-to-machine communications