Based on the recent research, the communication cost has been the most important open issue in network on chip (NoC). In other words, the lower the communication cost, the better the performance of the NoC and the lower the energy consumption. In this regard, although different mapping algorithms are proposed, they could not efficiently address some important challenges such as high complexity, early convergence at the local optimum, and performing well for all task graphs. The proposed method named IAM (IWO algorithm mapping) is an enhanced 2D-mesh-based-NoC mapping method which adapts the invasive weed optimization (IWO) algorithm, in order to efficiently map the IP cores to routers. The obtained results indicate that the communication cost improved 13, 9, 8, 4, and 4 percent in comparison with the LMAP, the CASTNET, the CLUSTER, the NMAP, and the PSO algorithm, respectively. Regarding energy consumption, IAM outperforms the NMAP, the CASTNET, and the CMAP and the Onyx algorithms by providing 15, 10, 7, and 7 percent improvement in energy consumption, respectively. Max delay was reduced by 11, 4, 5, and 5 percent compared to NMAP, CASTNET, CMAP, and Onyx algorithms, respectively. Throughput was improved by 9, 9, 4, and 10 percent compared to NMAP, CASTNET, CMAP, and Onyx algorithms, respectively.
Anzeige
Vorheriger Artikel Photonic crystal add–drop filter: a review on principles and applications
Nächster Artikel Ultra-fast all-optical full-adder based on nonlinear photonic crystal resonant cavities 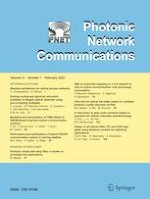 Design of all-optical AND, OR, and XOR logic gates using photonic crystals for switching applications

Photonic crystal add–drop filter: a review on principles and applications